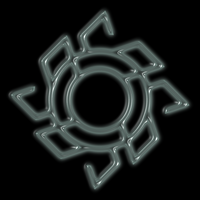 From the recording one bright engine

chapter three: “Bastards”. Her first thought, sprung from the hard, slamming end of latter years’ questions about what it meant to be childless after the fighting stops, was to find him and be his translator. Ancient philosophy, that thing about superego – she was his. When they met, when they won this world, when they would shortly lose it. In truth she needed to be, to frame her own anger against his. He carried a forge within himself, unbound, ever threatening to consume anything close. Others might seek to douse the blaze, to make it safe. Not her. She brought metal to it, unrefined death to be shaped and honed. They tamed a whole planet this way, a place where they could be proud to eventually join the dust. There was perfection here, the best kind, unforeseen. And today she felt the sting of the coin’s other side, the reality in every corner of the universe. If there is a pure thing, it will attract parasites. Some days, battle will favor the hero, but no one is without a number, a critical mass to cripple any advantage. This enemy has the number, cold and simple, and if she sees it he does. So she finds him even as her armor is half-ready, as she calls together their compatriots scattered to the hillsides. She holds his face and steers the rage. Final breath closes in, yes, but for the sake of now and before and because it will surely be another mess of pure, blistering, goddamned fun, you and I will take these bastards with us.

If this is the shape it takes, love
Then let it be, I say, let's
Saddle up
Aren't you tired of wrestling with the apparition of
something that never was
We are…

Never more than when we bled
Damning all the prophets said
Oh, you and I will take these
bastards with us

So this is the shape it takes
Proof that the lines we write
Just stand in the way
South of the sky, we’re moving in
Disarray
Between us and glorious